Newsmax apologized on Friday for falsely reporting that a Dominion Voting Systems employee, Eric Coomer, manipulated the results of the 2020 election.

The public apology comes four months after Coomer filed a defamation suit against Newsmax for its false claims about him, which added fodder to baseless conspiracy theories about the outcome of the election. 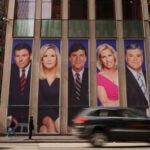 “Many of the states whose results were contested by the Trump campaign after the November 2020 election have conducted extensive recounts and audits, and each of these states certified the results as legal and final,” Newsmax also said in its Friday statement. “On behalf of Newsmax, we would like to apologize for any harm that our reporting of the allegations against Dr. Coomer may have caused to Dr. Coomer and his family.”

An attorney for Coomer did not immediately respond to a request for comment.