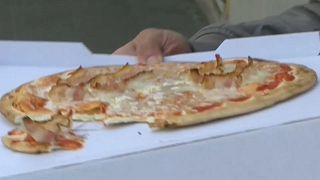 No doubt it will raise questions over authenticity, but at least the machine in the Via Catania is owned by an Italian, Massimo Pugolo, who knows he can never replace the genuine article.

“The reactions were a little contrasting,” Massimo explained, “some immediately made the comparison with the pizzeria, so they attacked us as crazy people who wanted to go against the market of pizza, or the art of pizza, instead others understood what our desire was, the message that we wanted to give, most of all the service, and they appreciated it. In spite of all of this, it being pizza or not pizza, it’s an ingenious idea.”

It takes just three minutes for the machine to deliver a pizza.

You pay, you choose which toppings you want – Margherita, Bacon, Four Cheeses, and Spicy Salami – and you see it being made while you wait.

The machine can hold enough dough for up to 100 pizzas and can be refilled by a technician at any time.

But what is the verdict on the streets?

Biagio Nocito was one of the first to try out Mr Go Pizza.

“It’s alright, good, the dough is good, I’m used to it being a little thicker, but it’s alright.”

This isn’t the first time such machines have appeared in Italy. Some have been installed at airports, for example.

But they are yet to change the way Italians consume one of their country’s favourite dishes.